Data inventorying exercise to support the Intergovernmental Authority on Developmen

The report comes at a challenging time for African World Heritage sites. Many sites are currently closed due to the COVID-19 pandemic, often resulting in substantial income losses for park management, local communities and businesses. Moreover, the violent attack that killed 17 people, among which 12 rangers, in Virunga National Park in the Democratic Republic of the Congo on 24 April 2020 is a reminder of the armed conflicts that remain a key challenge for many African World Heritage sites. Over the past decades, hundreds of rangers have lost their lives on duty, while protecting Africa’s natural treasures for the benefit of present and future generations.

“Africa’s natural World Heritage includes some of the most iconic wildlife and landscapes on the planet, which give hope and inspiration to people across borders and generations –  never more so than in these most trying of times,” says Peter Shadie, Director of IUCN’s World Heritage Programme. “This report can help African countries strengthen the protection of this invaluable heritage by making existing sites bigger and better, and proposing strong cases for new listings.”

At present, 48 of the 252 natural and “mixed” natural-cultural sites on the UNESCO World Heritage List are located in Africa, including places such as the Okavango Delta, the Serengeti Plains, the Virunga Mountains, the Namib Desert, and Mount Kilimanjaro. Many African World Heritage sites boast the continent’s unique megafauna – its rhino, elephant, hippo and giraffe – which is unrivalled elsewhere in the world. They also include rich tropical forests, which support a distinctive suite of species, such as great apes – gorillas, chimpanzees and bonobos – as well the curious lemurs of Madagascar, the strange giraffe-like okapi of eastern Congo, and the miniature pygmy hippo in West Africa.

However, it has long been recognised that both the number and size of natural World Heritage sites in Africa could increase. According to the report, 20 areas covering remarkable landscapes and seascapes across the continent could be potential future candidates for World Heritage listing.

Potential new sites include the Bijagós Archipelago (Guinea-Bissau), the Eastern Arc Mountains (Kenya and Tanzania), the Erte Arle volcano and Danakil Depression (Ethiopia), the Great Western Desert (Egypt), Lake Tanganyika (Burundi, Democratic Republic of the Congo, Tanzania and Zambia), the unique Madagascar dry forests, the Succulent Karoo desert (Namibia and South Africa), the Sudd wetland (South Sudan), and the marine hotspots in the Benguela Current and Mozambique Channel. They also feature a number of tropical forest areas, stretching from the Upper Guinea biodiversity hotspot in West Africa, across the Gulf of Guinea and Cameroon Highlands in Central Africa, to the East African coastal forests.

Beyond the opportunities for new nominations and extensions, the report discusses some of the key challenges for World Heritage on the continent and ways to improve the management of sites. While many examples of success exist at the site level, overall the effectiveness of protection and management of natural World Heritage in Africa raises concerns.

The IUCN World Heritage Outlook indicates that over half of Africa’s natural and mixed sites are in a critical condition or giving cause for ‘significant concern’. The continent has 12 natural sites on the List of World Heritage in Danger, more than any other region, accounting for 70% of the global total. This is the result of various factors including civil unrest, poaching, infrastructure development, mining and uncontrolled timber harvesting.

“World Heritage sites should be models of conservation and IUCN stands ready to help States Parties in Africa achieve the highest level of practice at the global, regional and community levels,” says Leo Niskanen from IUCN’s Eastern and Southern Africa Regional Office (ESARO) in Nairobi, Kenya. “This report will serve as a key reference for African countries, their partners, and anyone interested in Africa’s rich and remarkable natural heritage.”

The World Heritage Convention, since its adoption in 1972, has become one of the most important global conservation instruments. It embodies a visionary idea – that some cultural or natural heritage sites are so important that their protection is not only the responsibility of a single nation, but is also the duty of the international community as a whole, and not only for this generation, but for all those to come. Thus, the primary mission of the Convention is to identify and conserve the world’s natural and cultural heritage sites considered to be of “Outstanding Universal Value”. To be included on the Word Heritage List, sites must meet one or more of the 10 World Heritage criteria and also meet high standards of integrity and/or authenticity, protection and management. 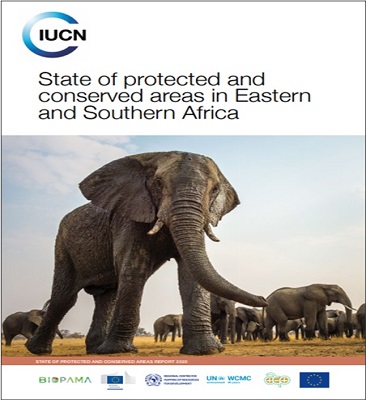 This report provides an overview of the status of protected and conserved areas in the ESA region, with special reference to Protected Area Governance and Equity (PAGE) and Protected Area Management Effectiveness (PAME), and the related assessment tools;